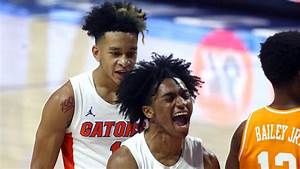 The duo locked hands at the ball, sending Pons staggering and tumbling to the court.

Tennessee never got up.

The No. 6 Volunteers were hammered by the shorthanded Gators in a 75-49 loss at the O’Connell Center in Gainesville, Florida.

Victor Bailey Jr., Tennessee’s leading scorer, had four points on 1-for-12 shooting, as the Vols had a season-low 49 points.

Florida did not have its top big man Colin Castleton due to an ankle injury. But the Gators still dominated Tennessee inside throughout the game.

The Gators shot 49.2% fueled by a dominant inside attack.

Florida scored 13 straight points and UT did not score again for 4:30 — a stretch defined by miserable possession on both ends of the court.

E.J. Anosike got a steal, but Fulkerson picked up an offensive foul. Florida’s Tre Mann made a floater before UT failed to cross halfcourt on back-to-back possessions.

Florida’s Tyree Appleby knocked the ball away from Bailey, then made an open-court layup. UF’s Anthony Duruji stole the ball from Anosike. He hit a 3-pointer on the ensuing possession to return Florida’s lead to 63-44.

The Gators took a 68-44 lead before Fulkerson converted a three-point play to break the drought.